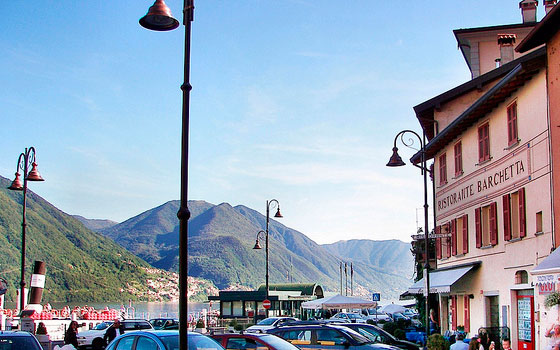 Argegno lies on the west shore of the Lario region at the Telo torrent mouth, at the mouth of Valle Intelvi (Intelvi Valley), happily defined as “the green heart of Lombardia”. People who drive, hastily, the via Regina, capture only the tourist aspect, with many nice Cafés and small restaurants, a pleasant lakeside and a tourist beach. A little village of ancient origins, between the mountain, the lake and the narrow gorge of the Telo torrent. The traces of the past are still visible and almost breathable in its little historic centre of medieval origin, with the typical houses leaning one against the other, the porches, the maze of the narrow streets with cobblestones and steps. As treasure hidden in a casket, a glimpse of extraordinary beauty and glamour is captured by a sensible and careful visitor. He can admire the ancient bridge in medieval stone which links the two torrent shores, the castle ruins dating back to the 13th century placed on a hillock which hangs over the center, the ancient mills, the remains of the historical artisan shops, the endless small and big signs of the human work and of his firm faith during the centuries, evidence which represents the vital plot of the urban and cultural centre of our lands.
Let’s try now to discover also Argegno with the pace of the pilgrim: walking, without haste, paying attention to the environments being ready to catch the ancient suggestions, memories and traditions. Decipher the centre of the Lario discovering again with patience its hidden soul. Discovering that the walking dimension is probably the only one which allows really to understand the space and things, because, better than anyone, allows to appreciate without haste the beauties, sometimes clear, sometimes more tiny and hidden, which our ancestors has transmitted to us.
Also for Argegno we have tried to let discover the hidden aspect of the town, to describe and to make readable also the buildings already cancelled from the flow of time. In any case, we have not had the presumption to provide complete and detailled information about every place, but we have tried to make it live on in the historical and geographical reasons that have caused its birth. Only in this way, the places will be able to keep alive the connection with its own history and they will be able to go on hoping for a deserved and due respect in the future.

We thanks, for all this, the Consiglio Regionale of Regione Lombardia and the Municipality of Argegno, which has sustained us under the patronage and with the contribution in this new challenge.

Along the ancient way towards S. Anna

We propose here, at first, an itinerary which traces out the ancient path from Argegno to Schignano, going along Sant’Anna church, very dear to popular devotion.