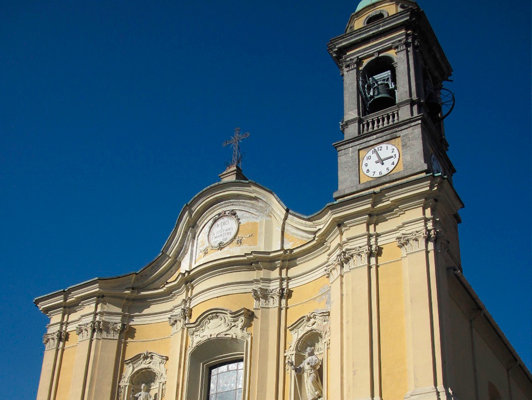 The village of Canzo lies on the banks of the Ravella stream, north of Lake Segrino, in the southern part of the Triangolo Lariano (a triangle-shaped area between the two branches of Lake Como), amidst some of the most renowned peaks of the Como Pre-alps: Corni di Canzo (Canzo’s Horns), Sasso Malascarpa (Mascarpa), Prasanto, Mount Rai, Cornizzolo. Its strategic position has made it a popular tourist destination ever since the nineteenth century and an important base for hikers, climbers and nature lovers.
However, Canzo is much more than this. Over the centuries this land has seen ruthless mercenary captains, humble saints, enterprising entrepreneurs, major politicians, pioneers of environmentalism, famous painters, all of whom have left indelible traces of their passage. Canzo is a village full of precious evidence of history, faith, and art, and of the industriousness of its inhabitants in sectors such as agriculture, breeding, iron and steel, and sericulture.
Let us try to discover Canzo with the pace of the pilgrim, by walking, unhurriedly, while concentrating on the places we see, so as to feel the vibrations of their history, folk memories, and traditions.
In fact, we believe that walking is possibly the only way we can truly understand places and things, because, more than any other manner, it allows us to appreciate the beauty, sometimes evident, other times more humble and concealed, that our ancestors have handed down to us.
It is only this way – we think – that our territory may foster the connection with its history and continue to hope, for the future, in a well-deserved and due respect

The Canzo path has been created within the “Turismo alpino: saper fruire il territorio in modo sostenibile” (“Alpine tourism: benefiting from the territory in a sustainable way”) project.
ID 27384355

On the banks of the Ravella. Mercenary captains, saints, artists and entrepreneurs

This route starts from the square of Canzo’s Trenord railway station, continues to the Provostship of S. Stefano, and, across the streets of the old medieval village, reaches Villa Meda and the Church of S. Francesco, also known as Gésa da San Mirètt, in memory of Saint Miro Paredi, the hermit who was born in Canzo, presumably in the thirteenth century. It then delves into the Ravella Valley on the trail of this figure, still much venerated in the area, before returning to the village to discover the remains of the formerly thriving manufacturing activity, and finally arriving at the Canzo-Asso Trenord railway station.