Path 3. The Walk of Saint Eutichio

Since immemorial times, a wooden cross stood on the top of the hill dedicated to the memoir of Saint Eutichio, the eighth bishop of Como. The cross protected the city from high. A new, iron cross, standing on a concrete base, was erected in 1934. The hill had been dedicated to Saint Eutichio, who lived in the VI century, and was considered an anchorite by the people of Como, because the Saint loved to retire himself in the wood above the Basilica of S. Abbondio, to pray with fervour. According to the tradition, he died right in this place; very soon the wood became a site of pilgrimage, organised by the communities of the faithful of the city of Como and its suburbs (S. Maria Maggiore – the current Cathedral – S. Giorgio, Breccia, Rebbio, etc.). The practice of the so-called rogazioni ecclesiastiche, which took place on the Sunday before the feast of Saint Marco (April 25th), was coupled with the pilgrimage to the site of Saint Eutichio’s death. You can reach St. Eutichio’s cross by various trails. The main trail starts from the Basilica of S. Abbondio with the nearby SS. Cosma and Damiano ancient church, and continues along via Regina Teodolinda, up to the church of S. Rocco, passing aside the city cemetery. Via Regina then takes the name of via Rimoldi, and starts to wind up the  Baradello Castle (Castel Baradello)  hill, passing before the facade of the ancient hospice of S. Lazzaro. A first deviation from the main trail stays on via Rimoldi and leads straight to the Basilica of S. Carpoforo (deviation); however, to reach the cross you must leave via Rimoldi, and take via Castel Baradello on the right. You will then reach the site called Genòcc (“the knee”). Once upon a time, this was the site of the church of S. Martino in Silvis, and of the annexed monastery. Further on, the road goes round the hill where the Baradello Castle stands (see deviation), to pass alongside the farmstead called Respaù di Sotto, then climbs up to the farm Respaù di Sopra. Both farms are ancient settlements, with dialectal names, that have been recently restored. From Respaù di Sopra, the trail either continues straight on, heading straight to the Cross, or takes the deviation to Pian Valle, where interesting archaeological sites of pre-roman times can be visited. After Pian Valle (refuge), on the right a cart-road, built in 1925 by Pio Bagatti, heads towards the refuge of Monte Croce, and rejoins the main trail that, after a short climb, reaches St. Eutichio’s Cross. The second access trail leaves the church of S. Giorgio, situated by the lake of Como, and, after climbing the via XXVII maggio, also called the Garibaldina, passes by the Valfresca valley, then the Crotto del Lorenzino and enters the commune of San Fermo della Battaglia (once called Vergosa), then, through via Monte Croce, reaches the refuge of Monte Croce and St. Eutichio’s Cross. To go back to S. Abbondio, we describe here a trail that passes through a wood of chestnut trees and robinias. After a short deviation, which leads to a scenic viewpoint on the city of Como and its surroundings, the trail descends at first rather steeply, then more smoothly, until it reaches an unpaved road that leads us back to S.Abbondio. All the trails described can obviously be walked in the opposite sense.

Crossing with other paths 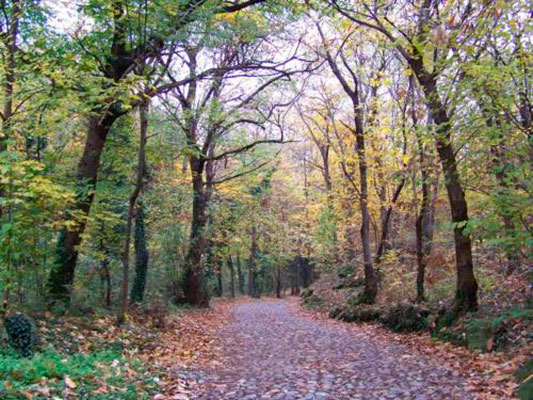 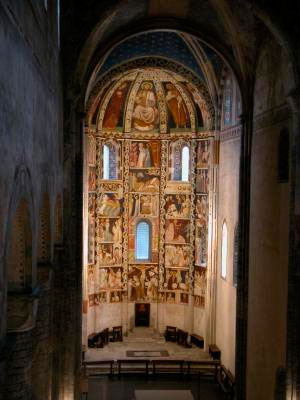 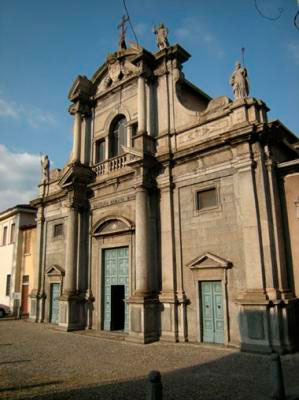 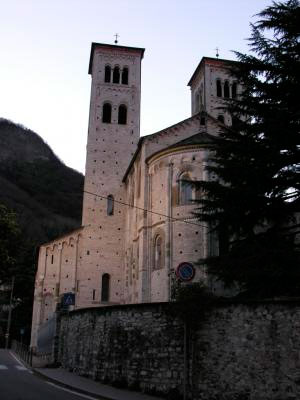