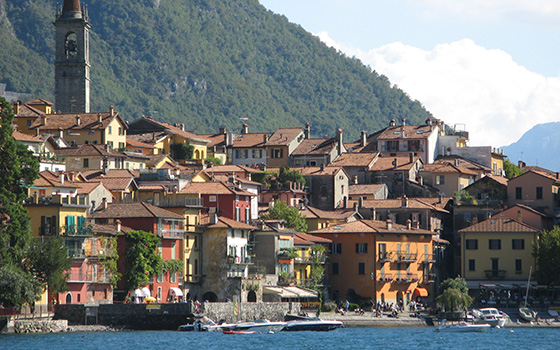 The town of Menaggio looks out to the Western shore of Lake Como, at the mouth of the valley of the same name that links Lake Como with Lake Lugano, on the cone of the Sanagra stream. A strategic position, at the junction between the important land route known as the “Via Regina (Regina Road)” and the track which, through the Menaggio valley, reached Bellinzona and the Ticino valley; the historic evidence of such importance lies in a fortification dating back to the 10th century. Medieval traces are still visible, such as the ruins of the castle, the urban layout of the town, characterized by narrow cobbled streets which climb up the hill, and remains of slabs and inscriptions. A fascinating tradition, too, originates from the Middle Ages: in 1163 the procession taking to Cologne the relics of the Three Kings, stolen from the city of Milan after it was destroyed by Frederick Barbarossa in the course of his win over this Commune of Lombardy, apparently made a stop in Menaggio. Not only do we know where it allegedly stopped, i.e. at the Hospice of the Magi, for many centuries a place of welcome and solidarity. We also have the actual alleged seats of the Three Kings. In addition to these fragments of history and legend, the village of Menaggio, located at the foot of the Sanagra Valley Inter-Municipal Park, offers extremely charming corners, which make it liveable, pleasant and relaxing, the ideal destination for anyone wanting to discover the innumerable signs, always important however small they may be, relevant to the work of man and to his solid faith across the centuries: pieces of evidence that constitute the vital weft of the urban and cultural fabric of our territories.
Let us try to discover Menaggio with the pace of the pilgrim, by walking, unhurriedly, while concentrating on the places we see, so as to feel the vibrations of their history, folk memories, and traditions. In fact, we believe that walking is possibly the only way we can truly understand places and things, because, more than any other manner, it allows us to appreciate the beauty, sometimes evident, other times more humble and concealed, that our ancestors have handed down to us.
In the case of Menaggio, too, we have tried to let the hidden face of the village emerge; in other words, we have tried to describe and shed some light on the vestiges of buildings that have been obscured by time. We had no pretensions whatsoever to supply complete information down to the minutest detail on places and monuments; instead,  we have tried to revive their importance  and raison d’être. It is only this way – we think – that our territory may foster the connection with its history and continue to hope, for the future, in a well-deserved and due respect.

The first itinerary of Menaggio was realized with the project

A village and a castle, under the aegis of the Magi